A deal was arranged between cousins,  Richard More of Linley (an estate of about 3000 acres) and Jasper More of Larden (about 960 acres), in which Richard’s son Samuel, aged 17, would marry Jasper’s daughter, Katharine, aged 26.  A large sum of money (£600 – about £60000 today) was given by Richard to Jasper as part of the deal when the two estates were to be combined by the marriage.  Jasper had no surviving sons (the second son had been killed in a duel!) to inherit the Larden estate so this deal would prevent his estate being passed to a more distant relative; daughters could not inherit at the time.  His timing was fortuitous as he died only two years later.

Whether or not either of the cousins had any say in this deal is not known but Katharine later declared that she had been betrothed (a contract of marriage), to one of her father’s tenant farmers, Jacob Blakeway (about 30 acres).  This should have made the marriage (in 1611 in Shipton Church) illegal but there appears to have been no protest at the time.  Jasper certainly had financial reasons to keep quiet and, if he had been a witness to the betrothal of his daughter, the benefits to his family of the marriage seemingly outweighed both his daughter’s wishes and any thoughts of what the law of the time proscribed.  If he knew of it, Samuel also had reasons to say nothing about the betrothal, as he, the oldest son of the Linley Mores stood to inherit both estates.  Samuel and Katharine took up residence at Larden and Samuel obtained a post as secretary to Lord Zouche (Lord President of the Council of Wales, Warden of the Cinque Ports, Privvy Councillor, diplomat and courtier) in London.  Lord Zouch proved to be a very useful contact a few years later.

So, the scene is set for a dramatic film or TV series:  Samuel spends a lot of time in London.  Katharine stayed at Larden.  Jacob Blakeway visited Larden, probably frequently.  Katharine’s parents turned a blind eye.  Katharine had four children, starting with Ellen a year after the marriage, followed by Jasper in 1613, Richard in 1614 and Mary in 1616.  However, in 1616, Samuel decided that the children looked too much like Jacob Blakeway and should be sent away.  He chose the Mayflower as Lord Zouch was involved with the Virginia Company and could make the arrangements.  Zouch had also disposed of a wife so could advise Samuel.  Despite several costly legal cases, Katharine lost her children and went to live with her sister in London.  Samuel was now of an age when he could decide to discard both his wife and the children.  Conspiracy theorists may imagine that this was the Linley Mores’ plan all along; that Samuel only had to wait a few years until he was 21 to discard his arranged marriage, meanwhile benefitting from the amalgamation of the two estates.  Divorce did not exist in law at the time but separation and the banishment of his children was within Samuel’s rights, even though he claimed that the children were not his. The Mayflower sailed with the four young children aboard in 1620. 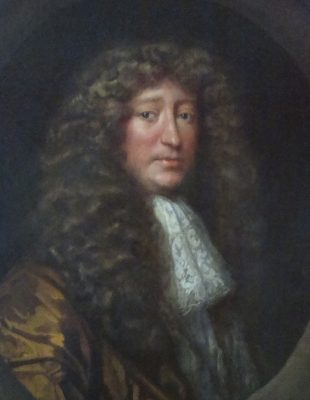 Samuel presumably continued to work for Lord Zouch but the English Civil War (1639) brought a new role for him, back home.  He became a commissioned officer in the Parliamentary army in 1643.  There were several skirmishes in Shropshire which, in the earlier stages of the war, was largely held by the Parliamentarians.  The armies consisted of impressed men and Captain More’s troop consisted mainly of men from his Linley estate.  The Royalists were making gains.  In 1644, Samuel More planned to capture Hopton Castle from the Royalists.  They tricked their way in past the guards by pretending to be Royalists and soon took over the castle.  The Royalists gathered a larger force outside and made three assaults to recover the castle, including on the third attempt, the use of three heavy cannon.  Captain More and the 29 surviving men of his army, eventually surrendered when the Royalists were about to detonate gunpowder under the castle keep.  They had found a way in via the garderobe outlet.  He had rejected several previous requests to agree terms so his final acceptance of an agreement was not on favourable terms.  All of his men were put to death.  Samuel More was captured and after a couple of months was paroled and offered freedom in exchange for a Royalist prisoner, Edward Cressett.  Samuel was sent to live at Cressett Hall (near Bridgnorth) where he was required to stay until Edward Cressett returned.  Once the exchange was complete, Samuel made his way home to Linley.  His military career resumed.  He became a Colonel in 1645 and in 1646 he became Governor of Ludlow and then Deputy Commander of Shropshire’s Parliamentary forces.

In 1625, Samuel had married Elizabeth Worsley, a cousin of Lord Zouch’s second wife.  Their son, Richard, inherited the Linley and Larden estates.  As there was no divorce in law at the time, for the marriage to be legal, it should have meant that Samuel’s wife, Katharine, had died but there is no record of this.  A later pardon granted to Samuel for his marriage, suggests that it was, in fact, bigamous.  We still have no record of Katharine’s death. 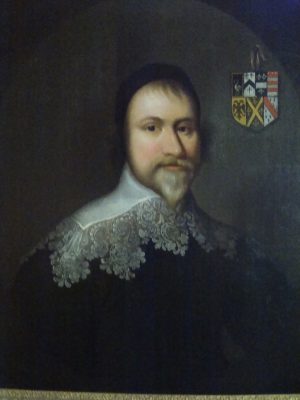 This Richard looks too young to be Samuel’s father who died in 1643.

Perhaps it is Richard, the son of Samuel’s second marriage in 1625?

Samuel’s father, Richard, was also prominent in the Civil War.  He was the MP for Bishop’s Castle and a leading member of the Parliamentary army’s organisation.  He delivered £120-worth (£120000 today) of his silver from Linley to London to help finance the Parliamentary operations.  He died in 1643.

There were more skirmishes in Shropshire during the Civil War than is generally recognised.  The famous escapade when Charles II hid in an oak tree took place in Shropshire, at Boscobel, on the eastern boundary with Staffordshire.  For more information on Shropshire’s role in the Civil War, see “To Settle the Crown” by Jonathan Worton (details in Further Reading).

The portraits of Samuel and Richard hung in Linley Hall until the contents were dispersed and the Hall sold, in 2016.  We would very much like to know their whereabouts today.