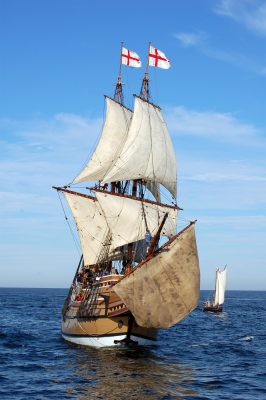 Once Samuel More had decided that his wife’s four children were not his, he arranged with his employer, Lord Zouche, for them to be sent away on the Mayflower.   The Right Honourable Edward Lord Zouche may have been sympathetic to Samuel’s marital troubles for he had also discarded a wife who did not please him. He was also particularly well placed “to provide for the education & maintenance of these children in a place remote from those partes where these great blotts and blemishes may fall upon them” – where they would cause no embarrassment. Zouche was an active member of the Virginia Company, which in 1618 began transporting children from London to meet a severe shortage of labour. To anyone paying his own way to Virginia, the Company assigned fifty acres in the colony. Samuel would have known of these arrangements which offered possible solutions for his problem.

The passengers formed a joint-stock company with London merchants. Each person going on the voyage paid £10 (£10000 today) for a single share or £20 for a double share. The partnership was to be for seven years, during which the passengers would hold all land and property in common. At the end of that time all was to be divided. The merchants’ hopes were for profit “by ye fishing in yt contrie,” the Puritans were looking for freedom to worship in their own way.

Samuel paid out £80 (for a double share per child) and a further £20 “in adventure,” the profit from which was to go to such of the children as should be most deserving. Articles of agreement were drawn up. The leaders of the Pilgrims agreed to take the children “and see that they should be sufficiently kept and maintained with meate drinke apparell lodginge and other necessaries and that at the end of seaven Yeers they should have 50 acres of land a peece in the Countrey of Virginia.”

The children were taken to London and delivered into the care of leaders of the Puritan passengers. Ellen was put with Edward Winslow, and Jasper with John Carver, who became the community’s first Governor in America and the first ever elected colonial Governor. The first list of Mayflower passengers, drawn up (but misremembered) by William Bradford some years after the voyage, states that “Richard More and another of his brothers was put with William Brewster,” but that unnamed “brother” was Mary. If the guardians were told anything of the circumstances which brought the children to them they divulged nothing. 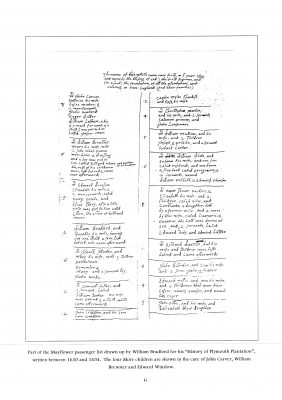 Part of the Mayflower passenger list mis-remembered by William Bradford in his “History of Plymouth Plantation”, written between 1630 and 1654.

The Mayflower sailed from London to join the smaller Speedwell and the two ships set sail from Southampton early in August. Jasper was a few days from his seventh birthday; Richard was not yet six; Mary was four years and four months. Ellen, a little over eight years old, was not with the others at first. Winslow’s party began the voyage on the Speedwell, but transferred to the Mayflower at Plymouth when it was decided that the smaller vessel was unfit for the voyage.

Finally, on 6 September 1620, the Mayflower set out from Plymouth, overcrowded with 102 passengers, 34 of them children, with two more to be born at sea. They had left their departure too late. At any time of the year it would have been an uncomfortable voyage, but they had to face heavy storms which not only made the voyage a protracted misery for most of them, but which blew them far north of their intended Virginia landfall. They reached Cape Cod on 11 November. It was too late to venture far down the coast and they had to seek a harbour nearby which could offer a place of settlement. There was shelter in a bay deep enough for large ships, several streams of good water, and ground which seemed suitable for crops. On 16 December they found the site which was to become New Plymouth.

Source:  Donald Harris, “The More Children and the Mayflower”