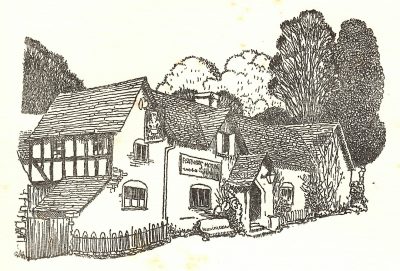 The Feathers at Brockton

This building was probably a row of cottages in Jacob Blakeway’s time.

We don’t know a great deal about the Blakeways.  Donald Harris[i] lists their holdings as tenants of the Mores of Larden.  These tenancies place them as yeomen farmers, of higher status than farm labourers but well below landowners such as the Mores who were considered minor gentry.  The leases don’t mention houses and we don’t yet know where they lived in Brockton.  We know a little about their family tree from wills which often refer to Brockton.

Jacob Blakeway (accused of adultery with Katharine More) was one of the six offspring of Edward and Ancaret Blakeway.[ii]  Edward was one of three children of John Blakeway.  One of Edward’s three brothers, Richard, was parson of Easthope.  Parsons held the honorary title of “Sir” which has led some writers to claim, incorrectly, that the Blakeways had noble ancestry.  However, being a parson meant that Richard was of some importance.  It would be interesting to know if he had received his religious education as a monk at Wenlock Priory.

Blakeway is a local surname, derived from Black Way (a dark lane).  The name continues today, as in Blakeway Hollow, Blakeway Coppice and Blakeway Farm, all below Wenlock Edge, near Much Wenlock in Shropshire.  There are currently 76 Blakeways in the current Shropshire Electoral Roll.  A Blakeway Society, formed to study the family history, has sadly closed but the Guild of One-name Studies lists Blakeway as an on-going project.

The Blakeway holdings which were farmed by Jacob, his father and, perhaps by his two brothers, were in the area bounded by the River Corve, the road from Brockton to Weston, the Wenlock Road and the road from Shipton Church to Weston.  There are four leases in Shropshire Archives totalling about 30 acres, made up as follows[iii]: 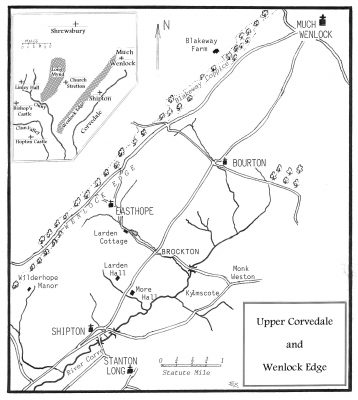 No dwellings are listed in these leases so the indications are that the Blakeways lived elsewhere.  They are often referred to as “of Brockton.”  Their wills show that their offspring were baptised in Stanton Long church, the parish church for Brockton.

What we do know, in considerable detail from the court papers, is that Katharine More was required by her father to marry her teenage cousin, Samuel More, in a deal to consolidate the two estates of Linley (near Bishops’ Castle) and Larden (near Much Wenlock).  She had four children.  The birth of child number four precipitated a suspicion in Samuel that he was not the father of any of them as they looked too much like Jacob Blakeway, described by Samuel as “a fellow of mean parentage and condition.”  Samuel, who had the necessary contacts, sent the children away on the Mayflower.  Katharine tried several court actions to prevent the loss of her children.  She claimed a pre-contract (betrothal) with Jacob.  If proved, this would have invalidated her marriage to Samuel but she had no witnesses to the betrothal so she exposed herself to the accusation of adultery.  Jacob was charged with adultery by Samuel and he disappeared in the face of an enormous fine.  His whereabouts continue to be a mystery.  Katharine went to live with relatives in London and little more is known about her.[iv]  Two of the four children died en voyage and a third died soon after arrival in America.  Richard survived to have a career as a sailor, ship owner, merchant and, possibly, bigamist as he seems to have had a wife on both sides of the Atlantic.[v] 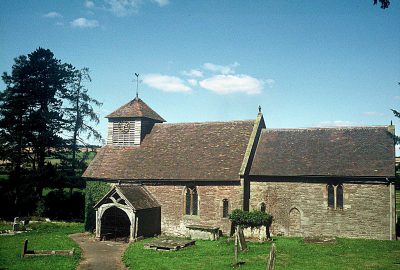 Stanton Long Church where many Blakeways were baptised

and married.  The parish registers date from 1568.